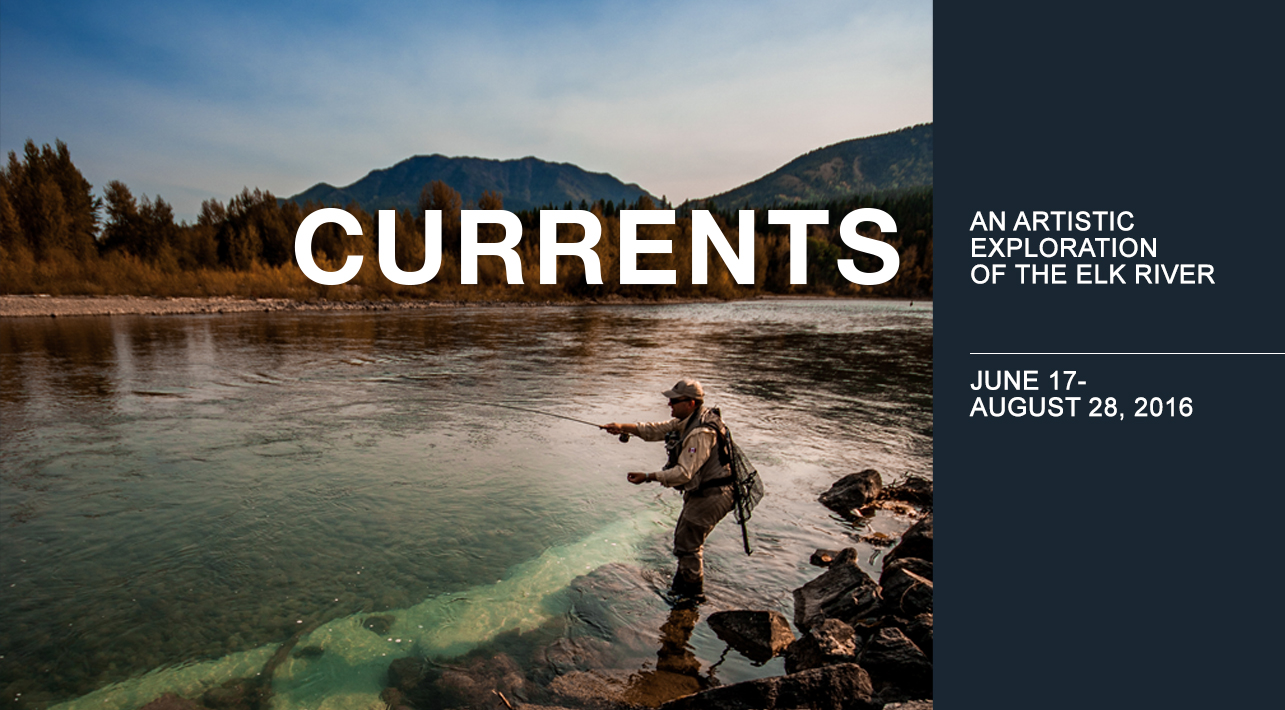 The Elk River has multiple identities.

It is a river named Wasaʔki by the Ktunaxa, fed by the ancient Petain Glacier.

It is a source of sustenance and energy.

It is a place valued by residents and visitors alike for recreation and fishing.

It is the lifeblood of our communities.

The Elk River is central to who we are and what we do.  This multi-disciplinary art exhibition explores how this precious resource shapes and defines our region.

DAVID AND SANDRA BARRETT
David Barrett, an engineer and fifth generation smith and his wife Sandra are both qualified British blacksmiths. Using modern welding and plasma cutting equipment and traditional coke fired hearth, the Barretts make all manner of things from forged and fabricated metal, using steel, bronze and copper. Sandra is also a talented felter and frequently incorporates glass and felt into her sculptural steel work.

PAMM CIUPA
Pamm was raised in Southern Alberta but now makes her home in Elko, BC. Pamm started drawing and sketching in her teens but did not really begin pursuing her artistic talents until taking a watercolour class in the spring of 2003. By the fall of that same year, Pamm founded the ‘Foothills Arts Club’ and took the fledgling 18 member original club to over 45 members by the time and her family moved to Elko in the summer of 2006.

CAROL COHEN
Carol has a Master of Fine Arts from Goddard College where she studied painting and sculpture. Art and creating with her hands has always been a part of her life. “I am inspired by the nature around me. Living in Fernie I am never at a loss of for ideas as I am surrounded by incredible beauty every day.” Carol is a member of the Fernie Arts Station Pottery Guild and paints at home.

CATHERINE CREWE
Catherine learned the craft of building skin-on-frame boat building technique to craft her West Greenland style kayak from Robert Morris, who in turn learned his technique from the Inuit. Robert is the owner of Brewery Creek Small Boat Shop in Vancouver. Educated as an artist and designer, he became interested in wooden boats while working at maritime museums and historic sites.

VANESSA CROOME
She has always been drawn to the arts, and completed a Creative Arts and Graphic Arts program. After many years in graphic design, Vanessa shifted back to the canvas in 2014. She and her husband Jay enjoy a symbiotic creative relationship in which their work feeds off each other and result in works that might have existed singularly.

HARMAN DELYEA
Harman s a self-taught artist and an avid outdoorsman who lives in Fernie, B.C. He spent most of his recreational time hunting, fishing, skiing and hiking in the Rocky Mountains. From an early age his interests were studying and observing nature’s world. He started painting wildlife in 1990 using acrylics and has since to painting landscapes.

MEGAN HAEUSLER
Megan was born and raised in Saskatchewan and has always been drawn to the creative arts. Before moving to Fernie in 2012, she received a Bachelor of Fine Arts in painting and a diploma in Architectural Technology and Interior Design in Moose Jaw, Saskatchewan. She has worked primarily with acrylics for many years and draws inspiration from the nature and architecture of her surroundings.

PATRICK MARKLE
Patrick grew up in the Kawartha Lakes Region of Southern Ontario. Living in cottage country, he gained an appreciation for the Canadian wilderness at an early age. His love of landscape lead him to the western shores of Lake Superior, where he attended Lakehead University and was trained as a printmaker focusing on block printing. After graduating with an Honours Bachelors of Fine Art degree, he moved west and began painting in Fernie BC. It is in this picturesque mountain town that he has been living and working for the past eleven years. With his use of smooth swirling line, dramatic light and form, his work focuses on the rhythm of the natural world and his place within it. In doing so, a spirit of exploration and adventure dominates his work and reflects an outdoor based lifestyle which is ingrained in Canadian culture.

LAURA NELSON
Laura lives and works in Fernie BC., where lifestyle, community, and landscape create a powerful sense of place and provide endless inspiration for this visual artist. Her paintings celebrate the colour, rhythm, and energy of the outdoors, and reveal the intensity of her bond to these natural places. Laura believes her work is her most powerful tool to draw attention to the beauty and significance of our wild places and advocate for the environment. Mostly a self taught artist, starting at an early age with pencil, charcoal, and pastel, Laura has been exploring with acrylic on canvas since 2003.

MARISA PHILLIPS
Marisa Phillips is a Ktunaxa Nation member from the St. Mary’s Reserve located outside of Cranbrook, BC. She is an artist, Ktunaxa language activist and presenter. Her main medium is large scale acrylic paintings and murals, but she has also designed logos, posters, booklets and illustrations for stories. She believes that art should invoke emotion, imagination, thought and excitement to the eye. As a child growing up in a native community, she was taught that everything had a spirit and to respect all things that Mother Earth created, equally. Due to those teachings, many of her paintings have a spiritual and/or natural theme associated with them.

STEPHANIE ROGERS
From working at a stained glass studio in Ottawa to attending the world renowned Pilchuk Glass School, Stephanie Rogers has been constantly expanding her knowledge and perfecting her craft. Since moving to British Columbia, she has been selected three times as a finalist and received an honourable mention at “Artsaround,” a juried visual arts exhibition. Her work has been exhibited at Images & Objects, the Canadian Craft Museum, the Bowman Arts Centre in Alberta and the Annual B.C. Art Association/Simon Fraser University Glass Exhibit.

KAREN TAMMINGA-PATON
Karen is a member of the Fernie Arts Co-op and teaches art in Lundbreck. She graduated from the University of Waterloo with a major in environmental studies and a minor in fine arts. Her interests led her to work outdoors with various environmental education organizations. Making the natural world more comprehensible to people gives her great delight, especially if it sparks the willingness to invest in conserving our wilderness places.

MARCIE WELSH
Marcie has lived in Fernie since 1994 when she moved here from the Sunshine Coast with her family. Marcie and her daughter Keya are founding members of the Fernie Arts Co-op. She takes pleasure in capturing the changing seasons and passing wildlife surrounding her mountain home.

EDWIN (TEX) WIEBE
Edwin is a contemporary artist whose passion for western Canada is detailed vividly by his watercolours. From alpine British Columbia to the plains of Alberta, Edwin paints from a mixture of memory and photo reference.  His mountain vistas are inspired by many miles on foot through mist and meadows, rivers and rain.